Bands often break up so that individual members can pursue alternative musical projects. For a quintessential troubadour like Ruarri Joseph, it’s almost impossible to say goodbye to yourself. But that’s exactly what the Cornish singer songwriter is about to do in the name of reinvention and revival.

Before he re-emerges in fresh and fascinating form, there’s a final chance to witness this acoustic wizard in familiar action as he visits Sligo to kick off the Surf Summit this November.

It’s more than a decade since a gifted, and modest, young Ruarri first stepped onto a stage to perform his fledgling cache of self-penned songs. 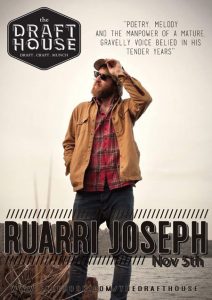 Audiences were immediately drawn by his poetry, his melody and the manpower of a mature, gravelly voice that belied his tender years, not to mention the warmth and strength of his guitar work and his natural rapport with a crowd.

Many more songs and many more stages have followed, from the intimate and quirky to the intense and immense – hundreds of headline shows, festivals and prestigious support slots, and a clutch of rich and finely-crafted albums that defy a single genre, but cherry-pick from the best.

Throughout his single-handed journey, Ruarri – still only in his early 30s – has retained a fundamental integrity. It’s the same deep-rooted spirit that saw him walk out of a major label record deal because it took him too far and too long away from his wife, his children, his home county and his creative truth; now it has prompted him to hang up his solo hat and say farewell… or, at least, au revoir.

Surf Summit will kick off on Thursday 5th November at the Draft House, Strandhill with craft beers and music from Ruarri at 8.30pm.