County Sligo is steeped in myth and legend, our landscapes have inspired poets, artists and warriors down through the centuries, and continue to draw many people to come live and visit here today.

Here on the Strandhill Coolera peninsula, we have a wealth of heritage sites to visits and stories to tell.

To coincide with this year’s Heritage Week, check out our Top Five Heritage Things to do in Strandhill below. Make it a family adventure and bring a picnic to enjoy along the way.

Just in time for Heritage Week, we are also delighted to launch the final video in our #StrandhillMoments series. This one celebrates the abundance of in history and heritage here on the Strandhill Coolera peninsula.

Carrowmore Tombs are the largest group of megalithic tombs in Ireland and the second largest in Europe. The earliest Carrowmore tombs are over five and a half thousand years old, which make the monuments older than the megalithic structures at Newgrange in the Boyne Valley and the Egyptian pyramids in Giza.

A permanent exhibition is housed in a converted cottage on site. Guided tours are available. The tombs are an absolute must-see during your visit to Strandhill. 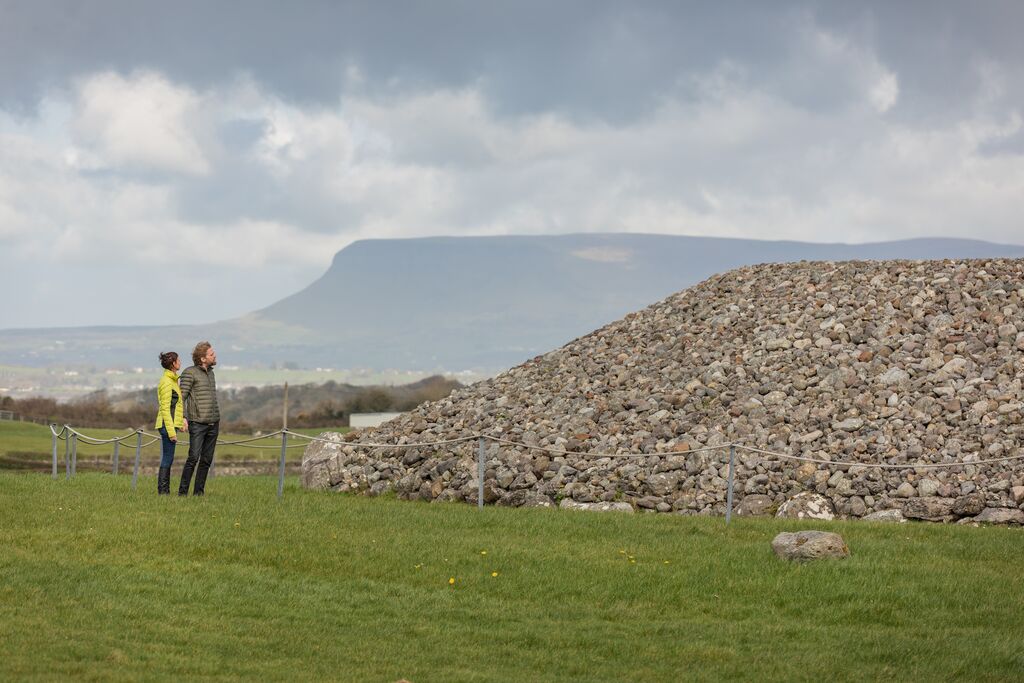 2. Follow in the footsteps of St Patrick to Killaspugbrone Church

Killaspugbrone church is a hidden historical treasure that was founded by Saint Patrick in the fifth century. According to legend, when Saint Patrick came to Killaspugbrone he tripped on rough ground and lost his tooth. Patrick gave the tooth to a local Bishop as a mark of friendship and it became enshrined in a gold relic that is now preserved in the National Museum of Ireland. 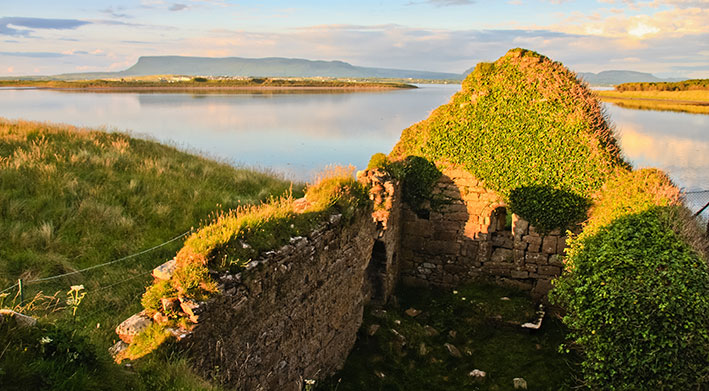 The present ruin at Killaspugbrone dates to the twelfth century and is situated behind Sligo Airport at the tip of the Coolera Peninsula only a ten minutes walk from the Strandhill Beach promenade along a popular walking route beside the sea. The ancient site overlooks Dorrins Strand (a special area of conservation), Coney Island and Maguins Island. The view, the sounds of the ocean and the spectacular wildlife make this an unforgettable corner of our little secret.

Its former name “Caisle-Irrae” suggests it was most likely enclosed by a circular stone fort or cashel – typical of an early Irish monastic settlement.

To get there follow the Killaspugbrone Looped Walk Trail which will bring you past the Church.

3. Discover our Warrior Queen’s Tomb at the summit of Knocknarea 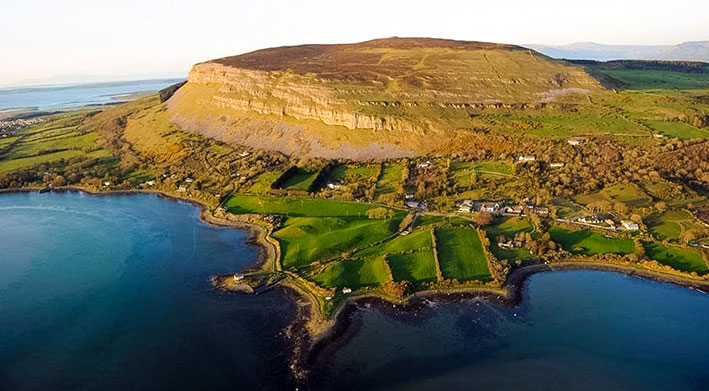 At 1073 feet above sea level, Knocknarea is a fine limestone hill standing between the bays of Sligo and Ballysadare. The name Knocknarea translates as ‘Hill of the Kings’.  The poet W.B. Yeats was fascinated with the beauty and legends associated with Knocknarea and called the place, “The Land of Heart’s Desire”.

Knocknarea is instantly recognisable by the large chambered cairn on the hilltop, which is known as Meascán Méadhbha or Meave’s Cairn. According to legend, the ancient Queen of Connaught, Queen Maeve, is buried underneath the cairn, which is also the largest unopened cairn in Ireland thought to conceal a Neolithic passage tomb. Follow a trail up the hill to visit Maeve’s grave with views over Sligo Town, the Ox Mountains, Lough Gill and Benbulben. 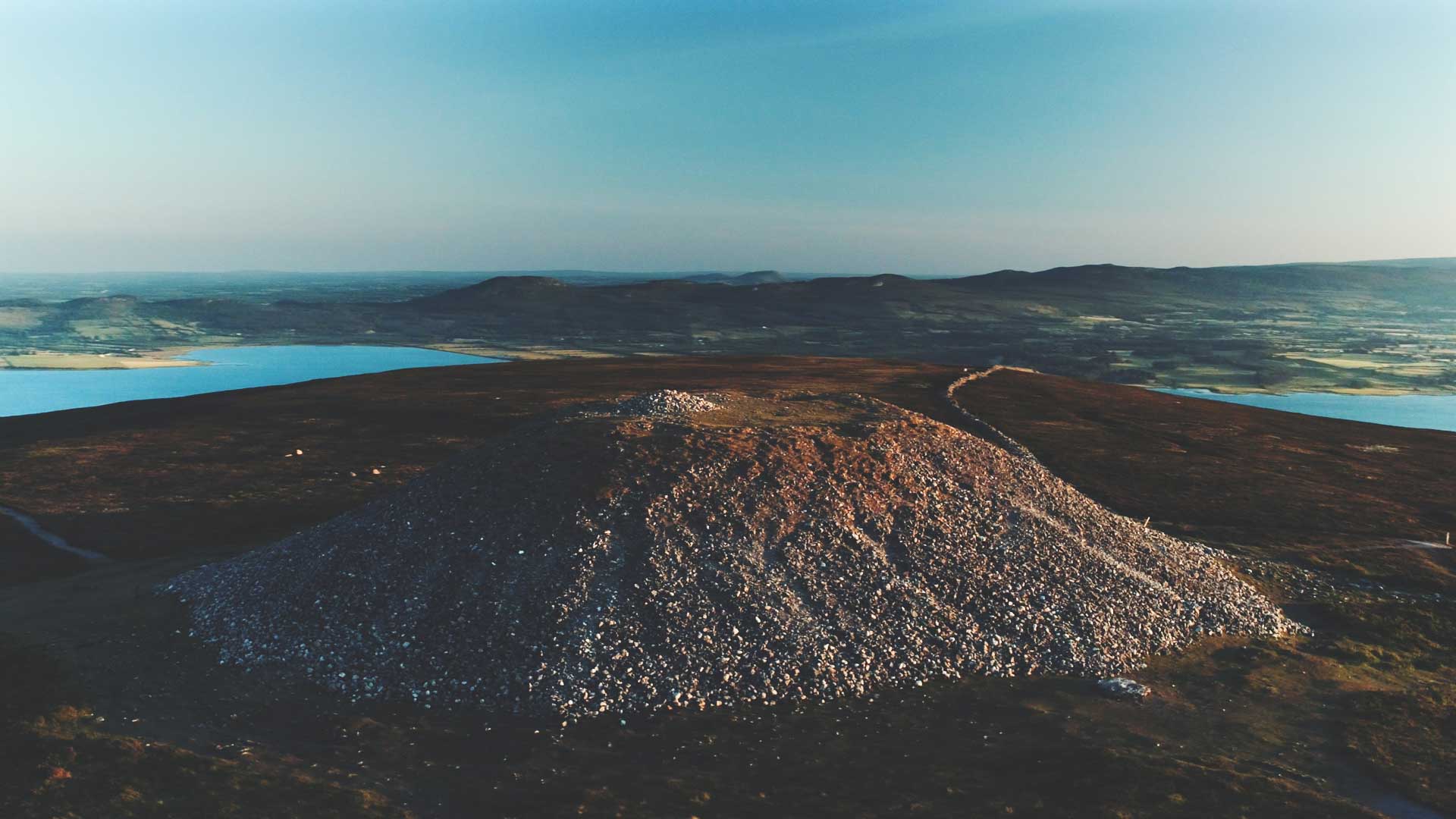 Queen Maeve’s Trail is a new walking trail that includes over 500 wooden steps up the northern slopes of Knocknarea, past Megalithic and Bronze Age remains, and opens out onto Knocknarea’s summit, providing spectacular views over Sligo and Ballisodare Bay Along the route are abandoned and derelict stone cottages, with stories to tell.  On a clear day, from the summit, you can enjoy wider views stretching as far as Nephin in Mayo and Slieve League sea cliffs in Donegal. 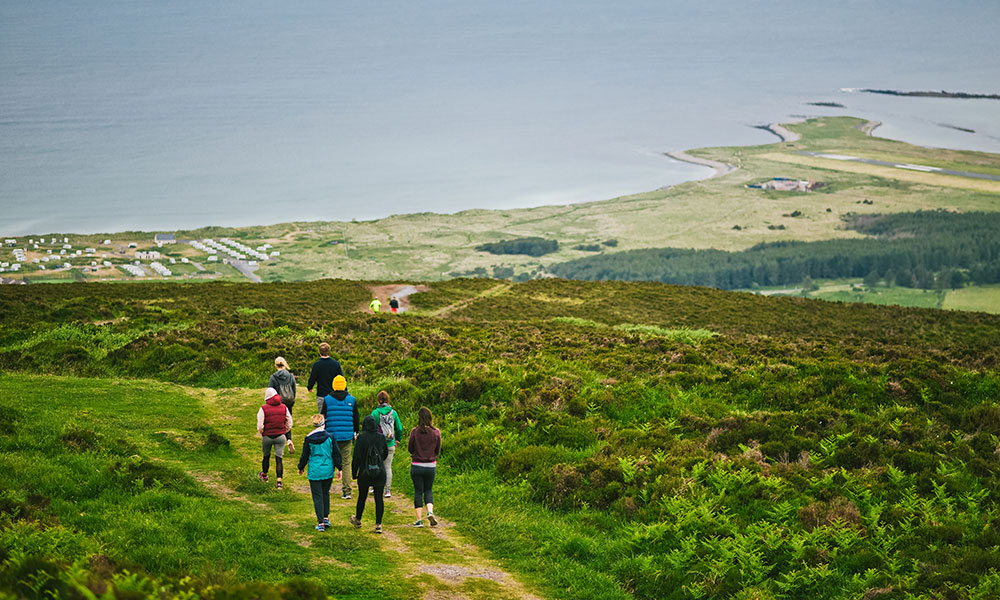 When the late Dolly Higgins died in 1970 the Strandhill guild of the Irish Country women’s Association bought her thatched cottage. The cottage was erected around the year 1800 and has survived without alteration to this day. Dolly’s Cottage is run as a folk museum by the ICA and tours are available in association with the Strandhill Tourist Office. The turf fire is still alight in Dolly’s Cottage and visitors are welcome to explore the little cottage and its many artefacts. 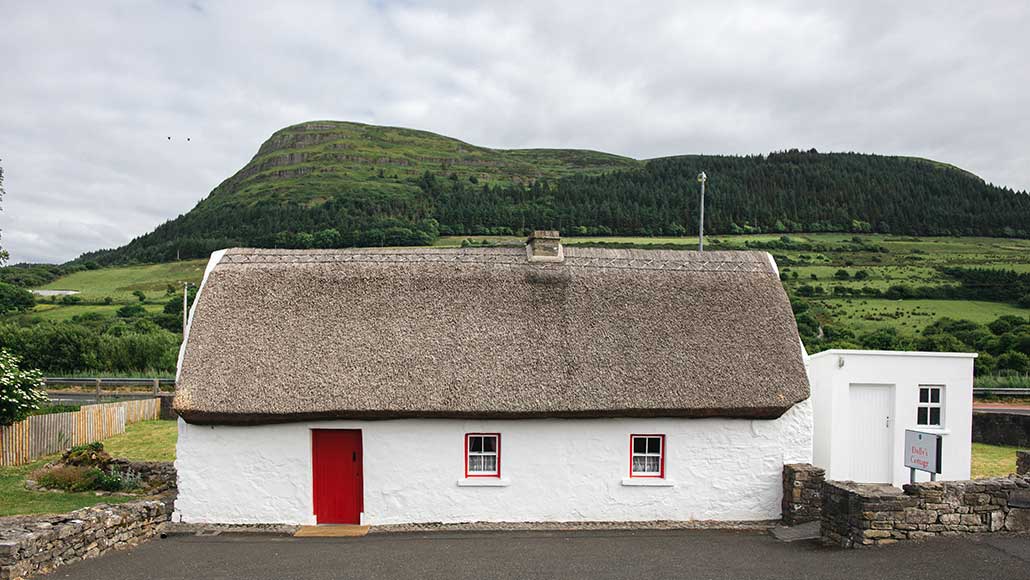 By 19th century standards in the west of Ireland, this was a luxury cottage. It was built of stone (not mud), with a proper chimney and fireplace (not a hole in the roof to let out smoke from a fire in the middle of the floor). It has two rooms and the old pouch bed is still in the chimney corner. The walls, roof, fireplace and loft beams are still the originals.

5. Discover an Islander’s Journey at Cummeens Strand and Coney Island 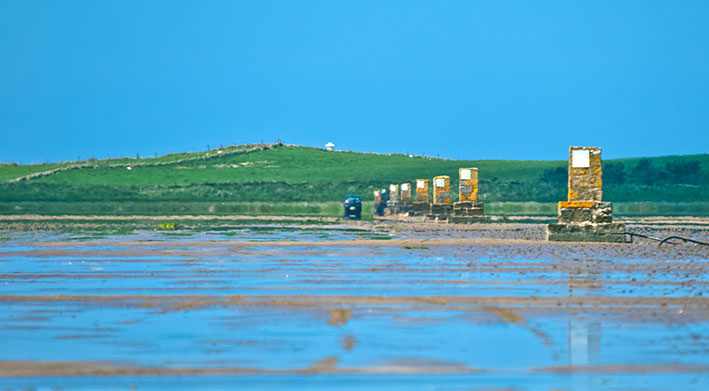 Cummeen Strand is the wide sandy tidal plain on your right as you travel from Sligo to Strandhill. Residents who frequent this route from town to the village are blessed to be presented each trip with such a stunning vista: the roadside giving way in an instant to a wide breadth of land and sea and harbour, Coney Island the idyllic object of the scene and the painter’s inspiration of Rosses Point glinting with its seaside charm in the morning sun, or hazy sunset, or at night the orange lights shining over Cummeen Strand giving the appearance of a huge ship parked in Sligo bay. 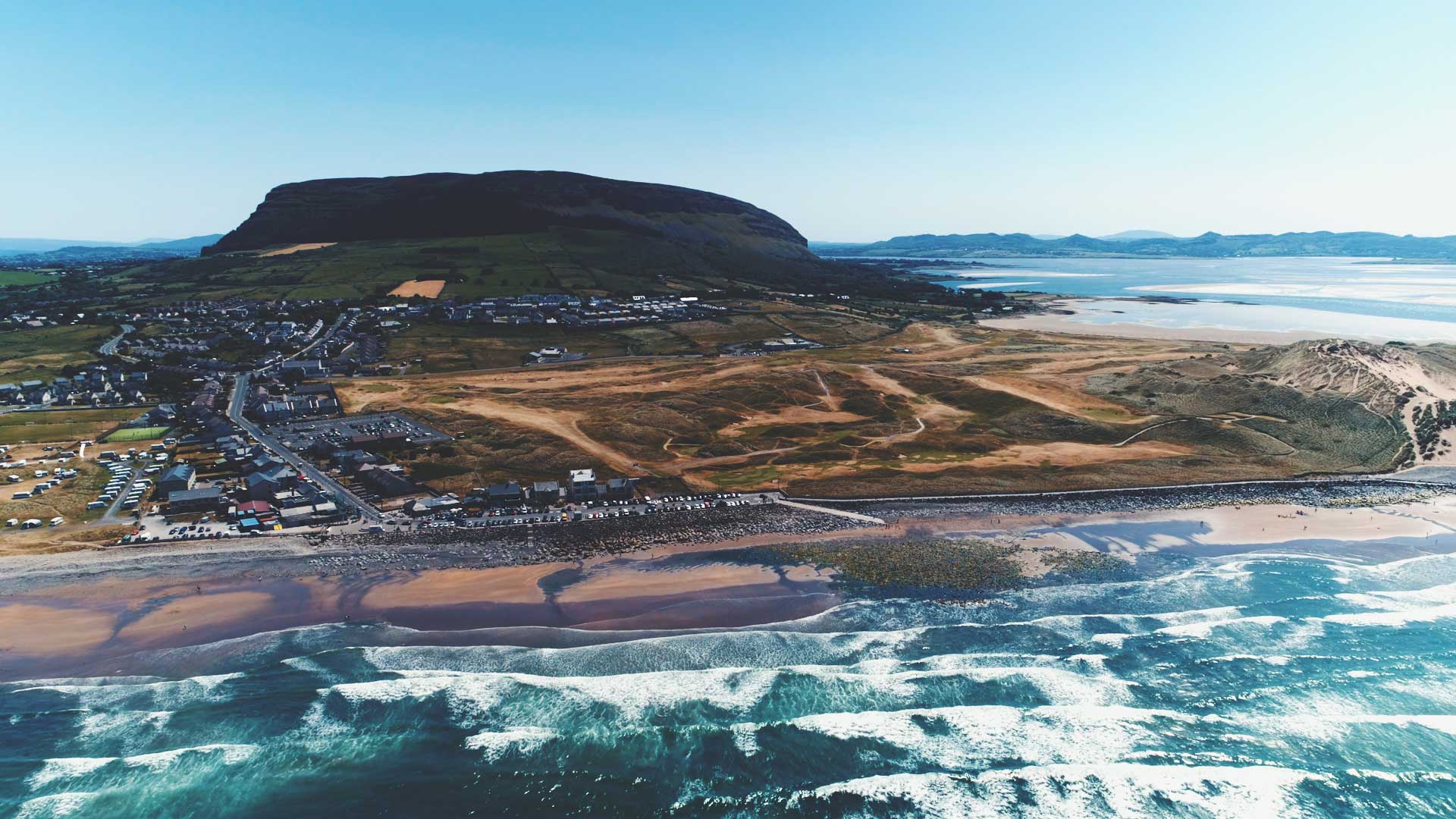 Cummeen Strand was immortalised by the poet W.B Yeats in his poem Red Hanrahan’s Song about Ireland with the lines:

‘The old brown thorn-trees break in two high above Cummeen Strand
Under a bitter black wind that blows from the left hand.’

The Cummeen tidal strand is divided in two by fourteen stout cut stone pillars. This part of Cummeen is called Dorrin’s Strand after William Dorrin, the owner of Coney Island in the 1820s. He was drowned by the fast rush of the incoming tide while returning to the Island along the strand in March 1823.  Provided the tide is low, the fourteen pillars guide travellers by the safest route the one and a half kilometres to Coney. It is always of the utmost importance a visitor to Coney checks tide times before departure.

If you’re interested in a Guided Heritage Walk of Strandhill, we highly recommend checking out Auriel Robinson of Seatrails. Auriel Robinson is an archaeologist and walking guide. She is a Wild Atlantic Way Ambassador and Champion for Sligo and the northwest of Ireland. See her Strandhill Heritage Trail here.

Special thanks to Strandhill Community Development Association and Sligo County Council for funding this initiative through the Town and Village Renewal Scheme.